This is the first in a series of posts on how Vistaprint is implementing Enterprise 2.0 within their organization.   I modeled this after the outstanding series of posts that Bill Ives did on Booz Allen Hamilton.  I conducted several in-depth interviews with Vistaprint’s Director of Technology, Daniel Barret and Senior Manager of Research and Innovation, Jay Moody.  A big thank you to both of them for taking the time to chat with me, and to Jeff Esposito, PR Manager at Vistaprint, for making all of this happen.

Vistaprint is an online supplier of printed and promotional material as well as marketing services, and is one of the fastest growing printing companies in North America. Within the enterprise 2.0 space, Vistaprint currently focuses on two things: an enterprise wiki and an internal ideation platform powered by Inutit.  I will delve deeper into both of these areas in future posts; for now let’s get started with the company’s business drivers.

Idea sharing has always been very important at Vistaprint.  Prior to many of the new social technologies that exist today, Vistaprint used an internal system called “the funnel.”  The funnel was a very egalitarian system – everyone including the CEO put ideas in the same repository.  Ideas would then go to an innovation captain who would be in charge of deciding which ideas would get implemented and how everything would work.  Roughly 800 ideas were suggested but the problem was that only a small fraction were implemented.  The big issues with “the funnel” was that a key component was not working for them: passion, as all ideas had to be vetted through the captain.  A key shift occurred when the ideas followed the passion trail through the use of the Intuit Brainstorm platform.  It’s important to note (and I will repeat this many times) that the goal wasn’t Enterprise 2.0.  The goal was to collect ideas from everyone in the company and to let them flow in a natural, non-bureaucratic way.   Vistaprint wasn’t looking for web 2.0; web 2.0 just happened to be the solution for what they were looking for.  The business driver for the Vistaprint ideation platform has always been to generate new ideas to deploy for customers.  Pay attention to the phrase: “new ideas to deploy for customers“.

Vistaprint knew that they needed “something” to manage information.  This realization started when the company was comprised of just a tiny staff of 80 people.  At first Vistaprint started public folders, then share drives, and then a blogging platform on Drupal which failed.  Vistaprint was moving very quickly as a young company so clearly something had to change.  Vistaprint had 50 engineers at the time and started a campus recruiting effort to get to 75 more engineers in a period of only two months; the capabilities team was really looking to ramp up.  Once all the engineers were hired, Vistaprint encountered a big problem.  They had no idea how to train all of the engineers and there was serious risk of breaking the software.  Eventually they were told to just “solve the problem WITHOUT using new technology”.  Despite the directive, they brought in another system anyway.  The goal was to bring 25 new engineers up to speed without slowing down operations and at the same time, making the entire process effective, lasting, and scalable.  Enter the wiki.   A  taxonomy of around 1,000 topics was developed.  The whole process was rather simple, conceptually.  Vistaprint had to first figure out what they needed and then find the technology to support it; again, a very crucial step.  They identified three key requirements to make this a success:

1.    A frictionless system that employees will want to adopt

2.    A robust tool that will solve real business problems and can be integrated into existing work processes

3.    A shift in company behavior to increase employee adoption

Eventually Vistaprint decided use Mediawiki, which is the same platform that runs Wikipedia.  This took two hours to set up and did include not upfront product costs.  Mediawiki is very robust and allows for plug-ins which enable integration points into other platforms and tools.  This was crucial for Vistaprint.  There was no competition; this was the best solution. 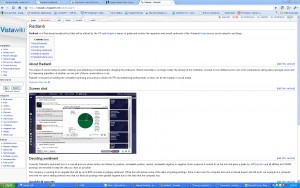 So where did the push for the ideation and wiki platforms come from?  For the Intuit Ideation platform, the push came from the innovation team which was comprised of about four mid-level managers.  For the wiki, the push came from the head of the capabilities team, however the ideas for how to actually do it and make it work came from the bottom-up.  These ideas were talked about for a while but Vistaprint really had no business value until they hired engineers and improved innovation that would effectively serve their customers.

•    A business need or a problem to be solved MUST exist in order to make efforts viable.

•    The ideation platform was focused around improving the customer experience; the wiki was focused on knowledge sharing and information.

•    It is essential to understand the requirements BEFORE looking for a tool.  You don’t want to find a tool first and then make it do what you need.

•    Senior level management should actually use and be involved in the efforts.  The CEO was involved and engaged from the beginning.

•    The push came from the top down and from the bottom up.  They worked together to make this work.

I’ll be going into much more in depth with Vistaprint and their E2.0 efforts in upcoming posts.  In the meantime, here’s some of the ideas I will be covering on Enterprise 2.0