Work, Love, And Life When Robots Rule The Earth 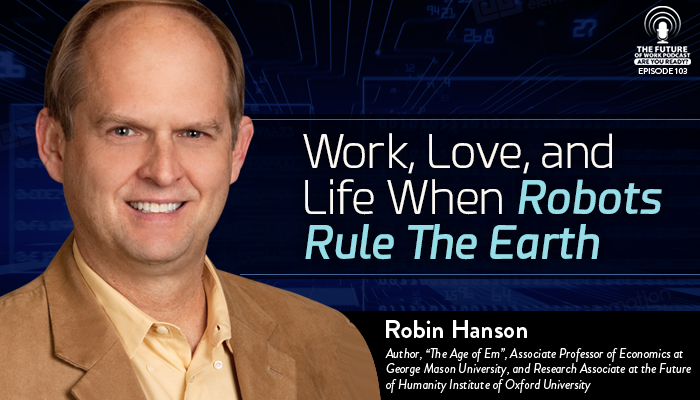 Robin Hanson is the author of a new book called The Age of Em: Work, Love, and Life when Robots Rule the Earth. He is also an associate professor of economics at George Mason University, a research associate at the Future of Humanity Institute of Oxford University, he has his doctorate in Social Science from the California Institute of Technology. He has studied political science, engineering, AI, physics, and economics. He has done research at Nasa, he has over 3100 citations, 60 publications, 420 media mentions, and he has a blog called Overcomingbias.com.

We have all heard of automation and artificial intelligence, but a majority of people are probably not aware of what an Em is. An Em is short for emulation and in an Em Age humans would be basically downloading their brains (their memories, thought processes, etc…) into an Em. Hanson discusses the fact that there are two different scenarios that could happen to get us to a point where we have robots that are as smart as humans. One way would be to “slowly write and accumulate better software on faster and cheaper machines”. This is what we are doing now and if we continued on this path it would take several centuries to reach this point. Another way would be to port the “software” from our brains into an Em. If we find a way to do this, the Em age could happen within one century.

In order to get to a point where we could port software to new machines we would need three things; fast, cheap parallel computers, the ability to scan our brain and find the spatial and chemical details to see what’s there, and a lot of computer models for how each cell in our brain works. Hanson believes that we are far off from being able to achieve this at this point in time. Once the brain of a human is scanned and put into an Em, the Em would then have the emulation of that particular person from the moment they were scanned. From there the Em would evolve and change over time.

So in this Em world, what would Ems do? In Hanson’s view they would take over all of the work form the humans. Some Ems would do virtual jobs and some would do physical jobs, therefore they would be able to switch from a physical form to a virtual form in an instant as we are able to get in and out of our car to go somewhere. Ems would live mostly in city centers and interact with each other as humans do.

And what would humans be doing during this time? Well, first they would all have to retire. After Ems are around humans wouldn’t be able to compete for jobs so they would retire to live off of their savings and live a life of leisure. Hanson believes some humans would have money from creating Ems, because in the beginning the people who are the best in their fields would be sought out to scan their brains for Ems earning big money. Later on younger people would most likely be sought out to create Ems as they would be able to learn new things the quickest. Some may also make money from investments or have money saved up. Those who don’t have money at this time probably wouldn’t survive, it would just depend on how areas would take care of each other, divide money, and provide for humans. Ems would most likely run 1,000 times faster than humans so they would evolve much more quickly than humans have. Therefore, the Em Age may only last 1-2 years so in that time humans probably won’t have time to change much.

There are different views that people have when they read about Ems, either they think it is fun and exciting to learn and think about or they think it is crazy or scary or impossible. For people who think it is impossible, Hanson explains that we have had 3 major eras of humans; Foragers, Farmers, and Industry and in each era there has been a sudden change to bring about the next era. So the next era after ours could be the Em Age. People who lived 1,000 years ago would probably think that the innovations we have today are crazy or impossible. Regardless of what the future holds it will still be strange to those of us who are living in the current era.

Hanson’s book touches on several aspects of the Em Age including the basics, organization, economics, sociology and physics. In the way of physics Hanson touches on things such as the relationship between the body size and mind speed of EMs as well as the energy and cooling usage that the Ems would need.

In the section on economics Hanson discusses many things including the fact that Ems will happen when it is feasible to make them at a low cost. Even if we had the technology now to create them, it would be too expensive. It would have to cost as much as or less than it costs to pay humans to do those jobs now.

When Hanson talks about organization he talks about how Ems will have similar units as we have among humans; cities, families, firms. However they will also have clans. Clans will be Ems that are copies of the same human and they will be more identical than twins. And in the section on sociology Hanson talks about how sex and mating will be different for the Ems. On the one hand they are a copy of humans and therefore it would be ingrained in them to have a need for love, sex and connection. However there would be factors that would make this difficult such as their work drive not allowing them to focus on anything else and the fact that the ratio between male and female probably wouldn’t be equal.

Many people may ask how could we get a future that no one wants. It is hard to imagine anyone in today’s age that would want all humans to have their jobs taken over by machines and the possibility that humans would be without money and therefore not be able to survive. However, it would not be a result of what we all want together. No one is choosing technology collectively; it’s not something we vote on or agree on. It is done by individuals who are innovating things in order to move forward and make money. The Em Age could come as a result of decentralized competition. Each of us trying to individually get what we want could end in all of us together getting what we don’t want.

Link From The Episode:

The Age of Em on Amazon