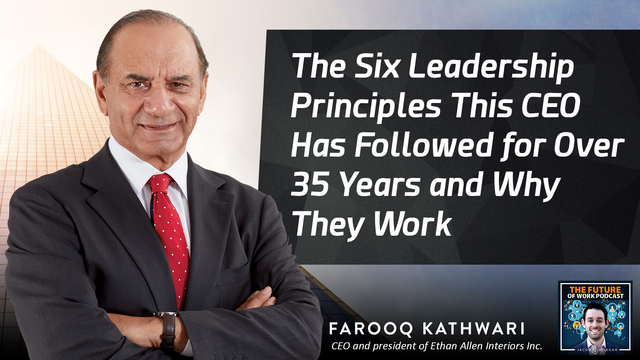 My guest today is Farooq Kathwari, the Chairman, President, and CEO of Ethan Allen Interiors, Inc., an American furniture chain founded in 1932 with more than 300 stores across the world. Farooq has a new book coming out on September 3 titled: Trailblazer: From the Mountains of Kashmir to the Summit of Global Business and Beyond. He has a truly fascinating life story, some of which you will get to hear today. Our discussion today covers a lot of ground including how his background shaped his approach to leadership, the immigrant mentality to work, the six leadership principles he created over 35 years ago that his team still follows today, and how to get people around you to think like an entrepreneur.

Farooq Kathwari is the Chairman, President, and CEO of Ethan Allen Interiors, Inc. an American furniture chain founded in 1932. The company now has more than 300 stores across the United States, Canada, Europe, Asia, and the Middle East. Farooq has been President of the company since 1985 and Chairman & CEO since 1988.

Farooq’s journey to his current role inside of Ethan Allen has been a very unique and inspiring one. He grew up in an area of conflict and he and his family became refugees and were forced to split up. At the age of 20, he made his way to Brooklyn, New York where he attended NYU at night and worked as a bookkeeper for a printing company during the day.

He also worked hard as an entrepreneur to sell arts and crafts to stores like Bloomingdale’s and Lord & Taylor. He later was hired as a junior financial analyst at Bear Stearns on Wall Street where he succeeded and therefore was recruited to set up an investment company. All the while he still sold his arts and crafts. It was at the investment company that Farooq was introduced to the co-founder of Ethan Allen, Nat Ancell.

He had a partnership with Ethan Allen which later on led to a merger. When he was in his 30s, he became the head of Ethan Allen.

How has his past shaped his approach to work and entrepreneurship? Farooq says, “When you say immigrant, you can also use the word entrepreneur. When you leave your home, when I came here with enough money for, I think about five or six months to survive, well, you have to be entrepreneurial. So immigrants, by nature, who leave their homes, who travel, have more of an entrepreneurial attitude, because not everybody from every other world leaves. It’s a few people who leave. They’ve got to have that DNA to be able to leave, to take risks. Immigrants also take risks.”

He also truly believes in treating all people with dignity and respect. He brings that belief into his role as a leader and tries to empower his employees. When he first started as the head of Ethan Allen he met several thousand employees from different locations and he said something shocking which was, “The main job of a leader is to help their people become better. If the leaders don’t do that, people have a right to revolt.” Farooq says helping people become better is “a very critical factor in leadership. Leaders don’t think that their job is to make people better.”

Farooq has all of the company’s managers and leaders write a report for him every single week. In the report, they can share things that are working well, things that need improvement, and issues they are having with any employees.

This practice came from one of the leadership principles Farooq created 35+ years ago. He still follows all of these principles today. They are:
Leaders must have self-confidence. This also means leaders have to empower people. Leaders who don’t empower people don’t have self-confidence.
Hard work–if leaders don’t work hard, how can they ask their people to work hard?
Excellence in innovation–You have to have a passion for being the best
Accessibility–leaders need to be approachable and they need to treat people with respect
Customer focus–The customer is number one, you have to take care of them
Prioritization–Leaders must constantly think about prioritization because not everything is important

What you will learn:
A look at Farooq’s fascinating life story and how he went from an immigrant student at NYU to the Chairman, CEO, and President of Ethan Allen
How his background shaped his approach to leadership
The leadership principles that Farooq created 35 years ago and why he and all the leaders at Ethan Allen follow them still today
How he provides feedback to employees who are not performing well
How to continue persevering in business when you keep getting told ‘no’
How to create an entrepreneurial mindset inside of your organization
What skills will be most relevant for employees in the future