Why Generalists Will Triumph Over Specialists In The Future Of Work 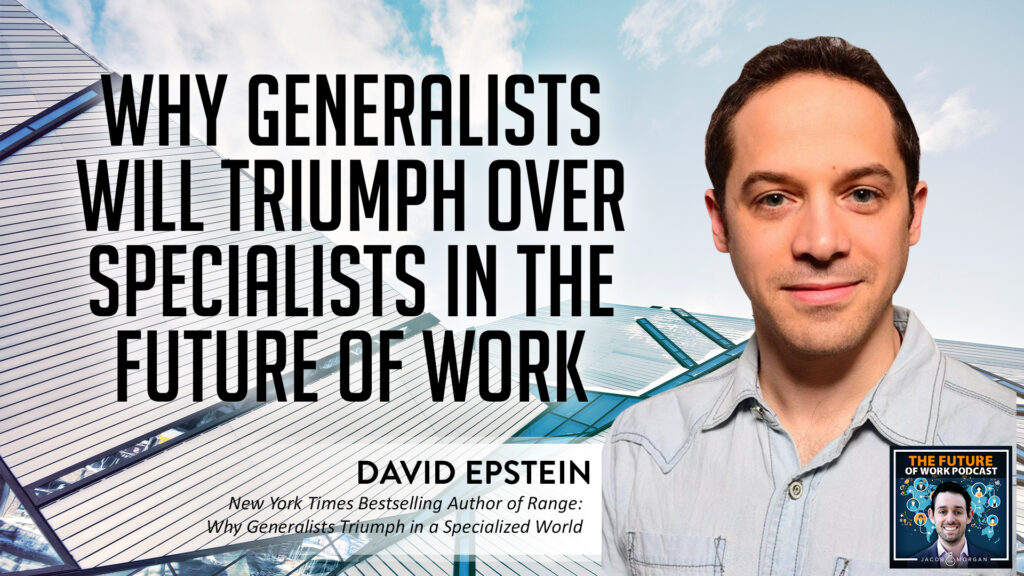 David Epstein is the author of two top 10 New York Bestselling books, The Sports Gene and Range: Why Generalists Triumph in a Specialized World, which is the topic of today’s discussion. David has a fascinating and very diverse background that led him to write both of these books.

David has a Master’s degree in environmental science and journalism. While he was in college studying to be a scientist he was also a competitive runner. When one of his teammates died in a race, David decided to merge his interests of science and sports together to figure out what happened and why extremely fit athletes can suffer sudden cardiac arrest.

While investigating the disease he ended up writing for Sports Illustrated. During his time at Sports Illustrated he wrote about things like the only living Olympian to have survived a concentration camp and the revelation that Yankees third baseman Alex Rodriguez was using steroids. He was also asked to speak at a conference about sports development where he and Malcolm Gladwell, Author of Outliers: The Story of Success, debated the best route to success in sports.

Through his research David has found that the best success comes from athletes who have a “sampling period” early on in their career. They don’t focus in on one sport, they try a wide variety therefore learning a broad range of skills and techniques. This goes against the typical view that athletes should train and specialize in one sport from early on in order to master that one sport.

David then applied this same theory to see if it was the same in the workplace as it is on the field, and his research showed that while specialists still have a place and they are still needed, they have been overvalued in our society whereas generalists have been greatly undervalued. It is generalists who are most likely going to triumph in the future of work.

David says, “If you go back through periods in history, there are times of more and less specialization. But, I’m thinking about it much more in a modern sense. I think some of that made sense, some of the science of management efficiency. Because, as industry grew, people were facing pretty repetitive challenges, or what the psychologist, Robin Hogarth, calls kind learning environments. Where you’re doing the same thing over and over, the feedback is very clear, next steps are clear, all the information is available, and the feedback is always accurate, and so on, and patterns repeat.That made a lot of sense for industry, and I think it also influenced things like education, because that was preparing workers for that type of work, and so on. It totally made sense. But, I think in the knowledge economy, people aren’t facing those repetitive challenges the same way, and they’re having to re-invent themselves over their career.”

If you are a specialist now, David says, it’s never too late to make changes. But you don’t have to change the industry you are in to become a generalist. The problem comes when we get into a rut and keep doing the same thing day after day. After awhile of this we plateau, we stop growing and learning. We have to keep challenging ourselves and get out of our comfort zones.

“I don’t think we have to think about taking flying leaps all the time. But, for me, I am, at all times, basically running little experiments to keep trying to triangulate what types of projects and work fit me. I’m just doing that all the time, and I’m sure I will for the rest of my life.”

Link From The Episode:

Range: Why Generalists Triumph in a Specialized World