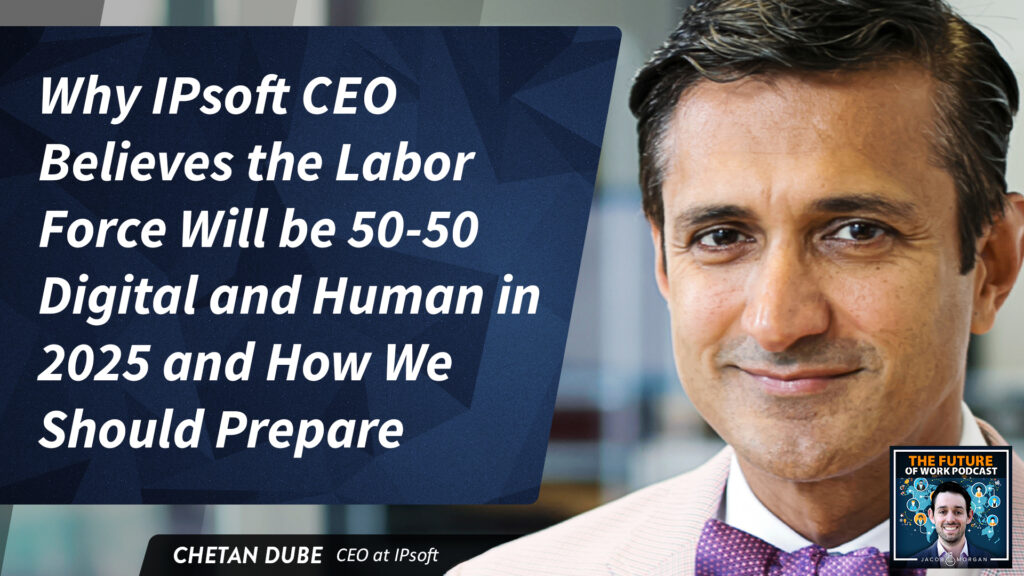 Chetan Dube is the CEO at IPsoft, an American multinational technology company which primarily focuses on Artificial Intelligence. IPsoft has just over 2,000 employees in 15 countries.

When you think of AI you might remember an experience you’ve had with a chatbot when trying to contact a company in order to ask a question, make a return, or purchase an item. Most of our experiences with chatbots are extremely frustrating and commonly end with us screaming “agent” into the phone. But IPsoft is working on solving this problem.

Chetan says the problem is the average IQ of the chatbots and virtual assistants is around that of a 5 or 6 year old human. How can you expect great customer service from a five year old? You can’t. So what IPsoft is doing is studying the human brain and finding ways to mimic the human hippocampus, ways to make chatbots and virtual assistants more flexible and able to read a customer’s mood.

So where are we now in the grand scheme of things being able to recreate human intelligence in AI? Chetan says, “It’s not a discussion if true artificial intelligence will start to rival human intellect. The only thing that is of discussion nowadays is when. Is it going to be in, as you mentioned, the Curtswell, the singularity and you feel that, is it going to be in 2030-35, is it going to be as we maintain by 2025, you will pass someone in the hallway and you won’t be able to tell if it’s a human or an android. I think that’s the real difference is that just the time horizon. If it’s going to be in the next six years, if it’s going to be in the next 11 years. It’s inevitable at this point that you will get to the point where these agents start to mimic human intellect.”

With all of that said, Chetan still believes that AI will never be able to truly master human creativity. This is a skill that is unique to humans. Machines and Technology can complete tasks, find answers in their databases, use algorithms to solve math problems, but Chetan believes they won’t be able to cure cancer, create life, find a way to colonize Mars, etc…Humans will always have a role no matter how many jobs AI can take over, because of human creativity.

The fact is advances in AI and technology are coming, it is not a question of if, but when and how fast. So what is Chetan’s advice for how to prepare for what’s to come? He says, “Dust the rust off your brain and focus on creativity and coming up with things that are … Do not play the machines on their playing field, you will lose. Do not play on mundane, ordinary chores and say I’m going to be the Luddite or neo-Luddite and try and stop the machines from driving cars or flying planes or driving trucks. They’re going to. They’re going to. That’s what they do. They are just more effective at that. Humans are more effective at, and will continue to be, creativity.”

How Chetan defines AI
What kind of AI IPsoft is designing and building
Where we are in the grand scheme of things of being able to recreate human intelligence
Is the world of AI over hyped?
Whether or not we should be worried about AI
How we can embrace AI and what’s coming
Who or what Amelia is