Developing A 21st Century Workforce: Insights From The CEO Of Siemens USA 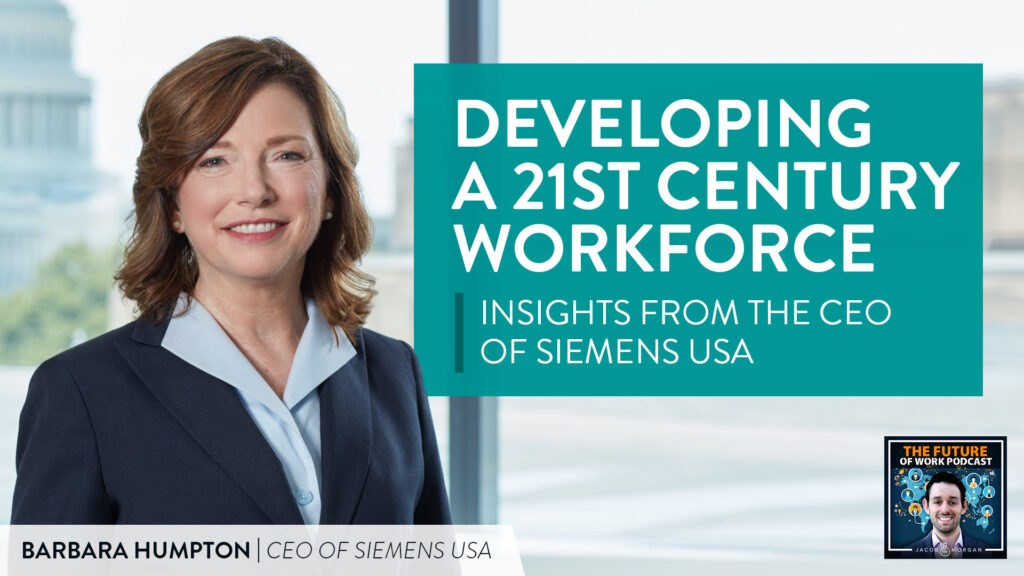 Barbara Humpton is the CEO of Siemens USA, a global company that operates in several areas including industry, energy, healthcare, and infrastructure. They have almost 400,000 employees around the world in 190 countries and Barbara is responsible for over 55,000 of those employees and the company’s largest market with over $23 Billion in revenue and $5 billion in annual exports.

Her journey to becoming CEO has not been a typical one, but it certainly is an interesting one. She studied mathematics in college and initially thought she would be a math professor, like her parents. But after college she got an offer to join IBM in software programming. In 2008 she became the Vice President at Lockheed Martin where she oversaw biometrics programs, border and transportation security, and critical infrastructure protection. She also worked as the Vice President at Booz Allen Hamilton, managing the program performance and new business in the Department of Justice and Department of Homeland Security, prior to moving to Siemens in 2011. Barbara says a CEO position wasn’t always in her sights, “I guess I always had my eyes on what I currently had to do, the most important job was the one right in front of me. And then I got invitations to partake in more and more interesting projects”.

There are a lot of responsibilities that come with being the CEO of such a large company, but Barbara says her number one job is, “to really think about the culture we’re creating and the future we’re driving toward.” One of the big topics she is focused on is building the workforce of the future.

There are so many things impacting the workforce of the 21st century–AI and automation, IoT, rapidly changing technologies, etc….and there is a huge responsibility for universities and organizations to help individuals be prepared for the future of work. Siemens offers multiple training programs, incentives, and reskilling options for their employees to make sure they stay relevant.

One example of Siemens dedication to keeping employees relevant occured in Charlotte, NC a decade ago. They had thousands of applicants for some positions they needed to fill, but not enough of the applicants were qualified to fill all of the open positions. So Siemens partnered with the local community college to create an apprenticeship program to train people who could then apply for the new positions at Siemens. It was so successful that they expanded the program to nine states.

When asked what advice she would give to employees in order to future proof their careers, Barbara says, “I actually think there’s one fundamental piece of advice that if I had gotten this advice earlier in my career, I think I would have been much more self aware through the process. Purpose. All of us need to be thinking about our own personal why. What is it that makes us tick? And my sense is that when leaders and when employees are aligned in their own personal purpose along with the purpose of the organization they’re in, boy, everything just moves more smoothly.”

Links From The Episode:
About Siemens USA