The assumption of working for a large established company has always been that there would job security. ”You should always take a job at a big strong company because at least you know will be there for a while,” is what people used to say. In fact, many people today still believe this. While it may have been true years ago it’s anything but true today.

Merck recently announced they are laying off 8,500 workers, Alitalia (the national airline of Italy) is proposing to lay off 2,000 workers, Blackberry is cutting around 5,000, Safeway is laying off around 6,000 (through their Dominick’s chain), Kelloggs is cutting over 2,000, Thomson Reuters is cutting 4,500, and Cisco is cutting around 4,000, EADS (the aerospace company) is cutting up to 6,000, and Qantas is cutting 1,000. The list goes on and on and I haven’t even included companies like Blockbuster that have completely gone out of business. Oh, and did I mentioned that these are just numbers from the past few weeks? These cuts are made by people in the finance department who are looking at balance sheets and data, not at people; in fact many call this “trimming the fat.” Where’s the job security at these companies? I think many of the companies today are actually in danger of a disappearing altogether, but that’s a topic for another post.

What about the fact that the average life expectancy of a company on the S&P 500 used to be 75 years. Today that number is just barely 15 years. Research shows that by the year 2027, 75% of the companies on the S&P 500 will be replaced. Take a look at the chart below from Innosight to see the trend. 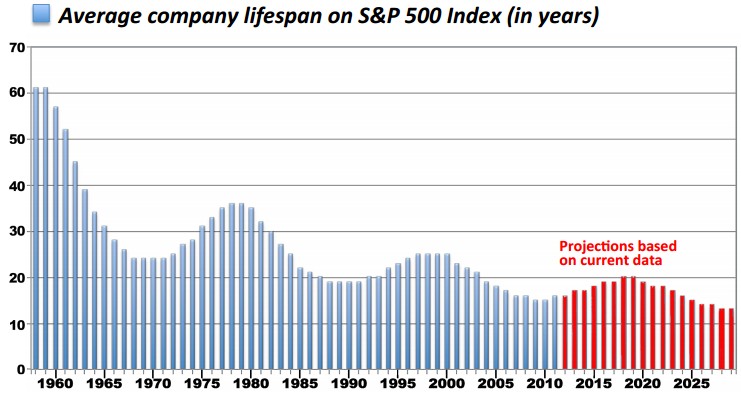 This trend doesn’t show signs of slowing down.

Previous generations primarily valued working at larger organizations because it meant more money and longer term employment. That’s really the only things that mattered. Along with this job security facade we also see that the future workforce is prioritizing other things above salary. This includes things such as flexible work environments and doing meaningful work. It’s no longer just about a paycheck. This means that one of the huge advantages that large organizations have is gone.

The size of some of these behemoth’s is also mind-boggling. Some of the companies have tens of thousands or hundreds of thousands of employees around the world, it makes you wonder if companies were ever meant to get that big and how much bigger they can possibly get. One would assume that after a certain point, once the companies go up, they must come down.

Pick a job that you care about, that offers you the opportunity to pursue your passions, and gives you freedom not the one that just has a higher dollar sign.