Three Forces Shaping The Future Of Wages And Paychecks 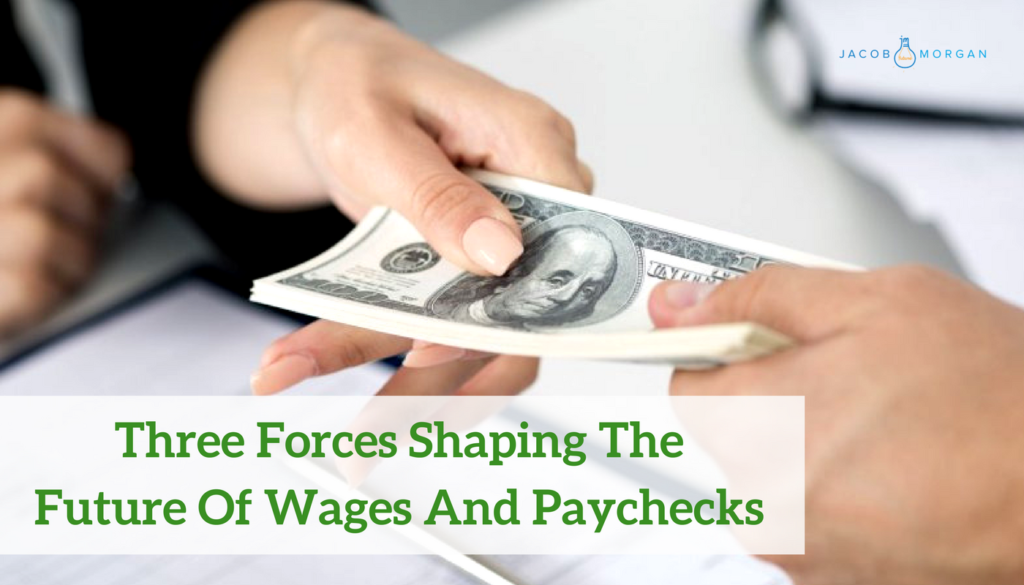 There’s a lot of talk about the future of work relating to employee satisfaction and finding jobs that have meaning and purpose. But even the happiest employees can’t ignore one of the biggest reasons to work: money. Like many other things in the workplace, wages and paychecks are changing for the future, and almost every employee could be affected. According to Dr. Lawrence “Larry” Mishel, an economist and president of The Economic Policy Institute, here are three things that could affect wages in the future.

According to Dr. Mishel, the biggest economic challenge of our time is wage stagnation, shown by the fact that worker benefits across the board haven’t grown in the last 12 years. While a healthy economy with wage growth would show workers’ benefits improving over time, the bottom 87% of workers have wages now that are the same or lower than they were in 2007. Wage stagnation can have a huge effect on the overall economy. The cost of living and other expenses may be increasing, but if workers are making the same amount of money, they often don’t have the funds to cover the rising costs.

Many people think of wage stagnation only for low-wage earners, but what we’re seeing in our modern economy effects everyone. Simply put, the wages we’re getting paid just aren’t high enough. But how does this affect the future and what can be done? It’s definitely an economic challenge, but it can be improved by focusing on creating more jobs and empowering workers so they can move between positions and have the chance to earn more money.

The freelancer economy will also play a large role in the future of work and wages, though not to the extent that is often reported. Many different reports pull in a variety of statistics about how the gig economy is growing–there are as many projections about the future of freelancers as there are studies and reports–but most vastly overestimate the size of this economy.

However, there is still the possibility that in the future we could all be freelancers or independent contractors, especially as the makeup of companies and entrepreneurship changes. In the future, we should focus on providing more resources to freelancers to give them the services they need, like healthcare or the ability to unionize, so that freelancers have the ability to make their side hustles a full-time job. The number of freelancers is definitely growing, but it doesn’t pose a threat to traditional jobs. If anything, it could provide a bump to wage stagnation.

Another major factor in the future of wages is the growth of robots and automation. There seems to be fear creeping across most industries that machines will take away jobs from humans, leaving many people unemployed. Dr. Mishel, however, points to the past as a way to understand the future: technological change like robots and machine learning hasn’t affected jobs and wages in the last 15 years, and despite some reports, our rate of technological change now is the same that it has ever been. If robots and automation really were taking away low-skilled jobs, the law of supply and demand says educated workers would be making more because their jobs would be more in demand. However, that isn’t happening, which points to the threat of a robot takeover being much lower than many people think. New technology isn’t implemented to take away jobs, but most often occurs only if it will save a company money. As automation helps organizations save money, they can likely transition employees to new positions that come from advanced technology. No matter what happens, it won’t happen as quickly as most people seem to think.

Changing practices and technology will have a big impact on our jobs and wages, but Dr. Mishel warns us to not get caught up in the flashy arguments and instead to focus on the pay for the jobs we currently have and what we will get paid for similar jobs in the future. As we work to get rid of wage stagnation and help all employees earn a fair wage, many of the other concerns will slide away.

Learn more about the future of jobs and paychecks here.

My new book, The Employee Experience Advantage (Wiley) analyzes over 250 global organizations to understand how to create a place where people genuinely want to show up to work. Get my free training series to create powerful Employee Experiences, or become a member of the new Facebook Community The Future If… and join the discussion.