Sex, Politics, Big Data and What Our Search History Reveals About Who We Really Are 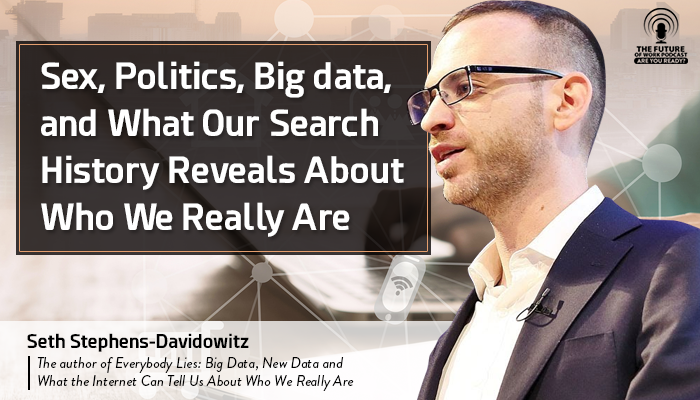 Seth Stephens-Davidowitz has used data from the internet — particularly Google searches — to get new insights into the human psyche. A book summarizing his research, Everybody Lies, was published in May 2017.

He worked for one-and-a-half years as a data scientist at Google and is currently a contributing op-ed writer for the New York Times. He is a former visiting lecturer at the Wharton School at the University of Pennsylvania. Seth received his BA in philosophy from Stanford, and his PhD in economics from Harvard.

The area of big data that Seth researches is ‘social science questions about what people want and need’. It is very straightforward based on information that humans create. (Like from Google or Facebook)
Traditional social science experiments take months but today it is possible to experiment in minutes using such resources as Facebook.
When asked what a data scientist is, Seth said that it is someone who knows how to code and build models of human behavior to predict what people will do and what will work in the future.

Just a few of the topics discussed in the book are sex, searches for sons vs. searches for daughters, anxiety, and insecurity.

Sex:
When asked questions about these sensitive subjects, people may lie. But searches indicated a variety of areas people search – areas that people don’t talk about. Therefore, people seem to have more interest in these topics than they are willing to admit.

Son/Daughter
Searches with the term ‘daughter’ are most often asking about issues related to appearance. For example, ‘How can I get my daughter to lose weight?’ For the term ‘son’ it is often, ‘Is my son gifted?’ There seem to be marked differences between sons/daughters in the searches that use these two terms.

Anxiety:
While common thinking may be that those living in large urban areas such as NYC or San Francisco are more anxious, Seth’s research showed that searches for these terms was higher in Kentucky, Rhode Island and Maine – and in rural areas, contrary to common thought.

Insecurity:
Stereotypes are often wrong. It is often assumed that women have many more insecurities about their bodies. However, the data does not show an overwhelming number of women versus men searching about these topics. In fact, about 60% were women and 40% of searches are men – not a ‘blowout’ on the side of women – that might have been thought.

Seth’s advice for individuals living in this new data world is to understand that Google has a lot of incentive monetarily to keep our data private, so he is not worried. One thing he is concerned about is that we may enter a society where we put resources such as time and energy, towards how we present ‘on paper’, because we are worried that we might be penalized based upon our ‘paper trail’ – and that could become a problem.

His advice to organizations is to use A/B testing (analyzing what people click on) is highly effective and should be used even more.