People Analytics: The Promise, The Perils, and the Possibilities 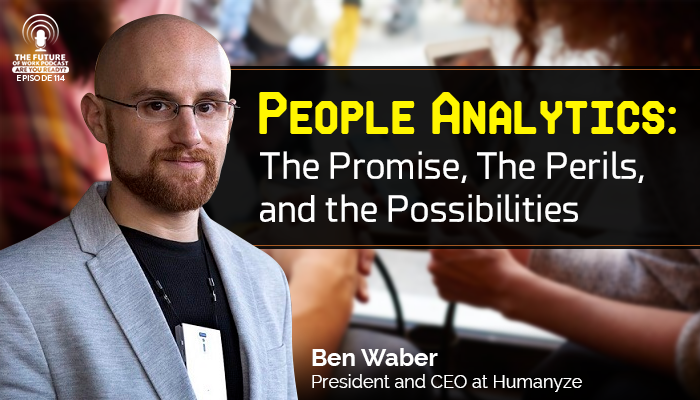 Ben Waber is the Founder and CEO of Humanyze, a people analytics company. He is also the author of a book titled, People Analytics: How Social Sensing Technology Will Transform Business and What it Tells Us About the Future of Work.

People analytics is a truly fascinating and exciting field that is changing the way companies test and analyze their employees, and ultimately how effectively the company is operating. Unlike the techniques that have been used in the past, such as annual surveys or polls, people analytics uses behavioral data that is collected directly from the employees in order to get a broader look at the day to day activities of a company. Ben Waber defines people analytics as “using data about what people do at work to change how a company is managed”.

Humanyze is a social sensing and analytics platform that uses sensors in employee ID badges to measure important behavioral data such as where people are in the office at any given time and the volume and speed of an employee’s voice when talking with a coworker. Gathering these types of behaviors allows companies to get a bigger picture of the ins and outs of their company and the performance and patterns of employees. It can help find issues such as causes of stress in the workplace or the mishandling of how people are rewarded. People analytics can help companies answer basic questions such as, how much time should a salesperson talk with a customer or how much time does management spend with a certain department? These seem like basic questions, but they have not been answered up until now because we haven’t had a way to collect the data that is needed to provide answers.

With people analytics we can look at the percentage of time a manager spends with their team, the amount of time employees spend with their coworkers, how people talk to each other and motion patterns. It is important to note that the sensors don’t collect individual conversations or specific data about an individual, rather they collect the data to give analysts a broad look at the company. People analytics allows data to come in and be tested constantly, as opposed to once a year with a survey. This helps companies to analyze data on an ongoing basis to allow them to make decisions and continue to adapt in a way that keeps them at the top of their industry.

This doesn’t mean that companies should stop doing surveys and polls; those are good initial steps, but using surveys alone is not as effective as they measure employee perception versus reality.

One example of a company who implemented people analytics is a call center that hired Humanyze. This call center, as with most call centers, had a huge number of employees and the goal of management was to keep as many people on the phones at one time as possible as success is measured by completed calls. Because of this, all the employees were broken up into teams and each team member had a separate lunch break. In terms of the number of people on the phone at one time, this seemed to be the most effective way to operate for the management team. However, after starting people analytics and testing they found that the performance level was nowhere near where it needed to be and employees seemed to be stressed. In the end they found that it was due to the fact that the employees were not able to talk to their fellow team members during breaks and therefore they weren’t able to vent about problem calls or get support from each other. From that data the company changed their policy to allow lunch breaks to have 15 minute overlaps for team members. This resulted in calls being completed 23% faster, lower turnover rate, less employee stress, and more cohesive teams.

Without people analytics the call center may have never figured out what their performance issue was. As Waber states, “they didn’t have the data before, so they had no reason to change”.

Waber advises companies to “Take baby steps. You don’t need to jump out ahead, but do something that makes you uncomfortable and outside of your comfort zone”. Even if you haven’t started implementing people analytics yet, Waber says, “you are not that far behind, yet. But in the next couple of years it will be harder and harder to catch up”.

Tune in to the podcast and make sure to subscribe on iTunes for more episodes.

What is people analytics

Different types of data that organizations can collect

Software and hardware in people analytics

The growing role of data scientists and analysts

What organizations are doing in people analytics and why

Links From The Episode:

Get Leadership Hacks from the World's Top CEOs

Enter your info below to get the 11 leadership hacks.