Jason Redman is a Retired Navy SEAL Lieutenant, motivational speaker, and the bestselling author of Overcome: Crush Adversity With The Leadership Techniques Of America’s Toughest Warriors.

Jason grew up in a family that was very patriotic and enjoyed serving their country, so he heard about the military early on and from about the age of 12 he knew he wanted to do special operations. There was something about the Navy SEALs and the fact that it is the hardest training in the entire U.S. military that piqued Jason’s interest. People told him he would never make it, but that just pushed him even more to reach that goal. After he graduated high school he headed to Boot Camp.

“SEAL training is legendary and it’s difficult. And it’s been that way from the very beginning all the way back in World War II. And interestingly enough, it’s pretty much maintained the core of what that training was back then. And even today, SEAL training has a 75%- 80% failure rate. So attrition rate, almost 80% of the people that start SEAL training, don’t make it through the majority of it, you know, don’t make it because obviously, they quit. But then there’s a large amount that don’t make it for medical reasons. And then performance reasons, academic reasons. All these things play into a guy’s ability to make it through training. And it is legendary in its difficulty.”

Back in September 2007 Jason was part of a SEAL Assault Group in Iraq. It was a pretty volatile time in the war and they were conducting missions almost every night. On September 12 they got word that a senior Al-Qaeda leader was going to be in a specific location at a specific time and Jason’s team launched a mission to go after that individual.

But what they didn’t know was they were walking into a very well executed Al-Qaeda ambush and Jason and his team were shot by multiple machine guns. Jason was shot eight times in his elbow and his face. His jaw was shattered, all the bones above one of his eyes were broken, he was severely injured and knocked out. His teammates continued to fight and got him out of there and he was sent to a hospital in the U.S.

Jason remembers that in the beginning he was so overwhelmed. Doctors were giving him a ton of information about his injuries and treatment, at one point they thought they might need to amputate his arm, he was being fed by a stomach tube. He thought for sure his career was over and didn’t know where he would go next.

People would come visit him and they would talk about other people they saw throughout the hospital and what a shame it was, what a pity that we send them off to war and they come back broken and they’ll never be the same. And Jason had a realization hearing those comments. He didn’t want to be a victim and feel sorry for himself–he had been through tough times before and overcame them and he knew he had a choice.

We all have a choice when faced with hard times–whether you are a salesperson, a doctor, a police officer, etc…humans are humans and we have a choice in how we react to situations in our lives.

So he put a sign up on his door that said, “Attention to all who enter here, if you’re coming in this room to feel sadness or sorrow, don’t bother. The wounds I received, I got in a job that I love, doing it for people that I love, defending the freedom of a country that I deeply love. I will make a full recovery. What is full? That’s the absolute utmost, physically. I have the ability to recover, and then I’m going to push that about 20% further through sheer mental tenacity. This room you’re about to enter is a room of fun, optimism, and intense rapid regrowth. And if you’re not prepared for that, go elsewhere.”

He wrote that sign for himself, he knew in his time of darkness he needed to have a mission statement that he could focus on when he wanted to quit or was feeling down. It wasn’t an easy journey, just because he made that statement doesn’t mean everything was better from that moment forward. He had surgery setbacks, days of intense pain, infections, etc… But he always thought back to those words and pushed forward.

In life, Jason says, you have to understand what your values are and what your mission is. That’s what has to drive you forward.

While we can’t control everything, we do have choices in life, no matter what role we are in. Jason teaches three rules of leadership when he gives his talks. He says it starts with rule number one, which is 70% of leadership is how you lead yourself. It’s about your self-discipline, how you build structure in your life, how you build repetition and processes to get things done, how you are balanced as a leader. Leading others usually happens before you ever open your mouth.

Rule number two is to lead others. After you are leading yourself and you know what your mission & values are, you can start leading others. It is important that you build trust, communicate clearly, and always stay on course.

Rule number three is lead always. No matter what you are facing in life, as a leader you have to realize that you are leading. People are going to look to you as their example, so you have to step up and lead regardless of what you go through in life.

Can resilience and overcoming adversity be taught?

Jason has gone through a lot in his life and no matter what he keeps pushing forward and maintains a positive attitude. Leaders inside of organizations today need to have this type of mindset in order to overcome all of the challenges and hurdles that come along with this fast-paced, new world of work. But can this mindset be taught?

While some people do have a higher level of resilience within themselves than others, Jason says it is something that can be taught and improved. It’s taught through doing hard things. You have to get out of your comfort zone on a regular basis. If you are afraid of speaking in public, join Toastmasters. If you are afraid of heights, jump out of a plane.

“Why? Because it forces you out of your comfort zone. And that’s what builds your resiliency and your overcome muscles. I’ll tell you what I try and tell people all the time, you cannot just click a switch and turn on an overcome mindset in a crisis. If you’ve never built one, it just won’t happen. I don’t care how much you read. I don’t care how much you think you know about it. If you have not done some hard things in your life and built your overcome resiliency muscles, it won’t happen.”

The three Ps–how Jason stays focused on his goals

One important part of leading yourself is having goals and building a structure that helps you stay focused on them. Jason has created the three Ps that help him stay on track and focused on his long-term goals. Narrowing it down to these three areas helps him move the needle forward a bit day by day instead of having huge lofty goals that seem way out of reach.

His three Ps are:

“All these things are critical components of leadership, that if you’re not doing them, if you are telling your people they need to have balance with their family, but you’re not showing that, then they’re going to slide out of that also, because that’s how we learn. We emulate our leaders. And we value what our leaders feel is important.”

This podcast episode is sponsored by Perceptyx.

Perceptyx helps enterprises get a clear picture of their employee experience with a continuous listening and people analytics platform aligned to key business goals. With the industry’s largest portfolio of survey types – including engagement, DE&I, lifecycle, 360 feedback, pulse, and more – now you can see not only what’s going on today, but how to move forward tomorrow with insights and prescriptive actions for every level of the organization.

Given our unique blend of technology, domain expertise, and ‘above and beyond’ customer service, only Perceptyx makes all this possible. It’s why 30% of the Fortune 100 already rely on Perceptyx and why 95% of the organizations stay with us year after year. Learn more or request a personal demo today at www.perceptyx.com. 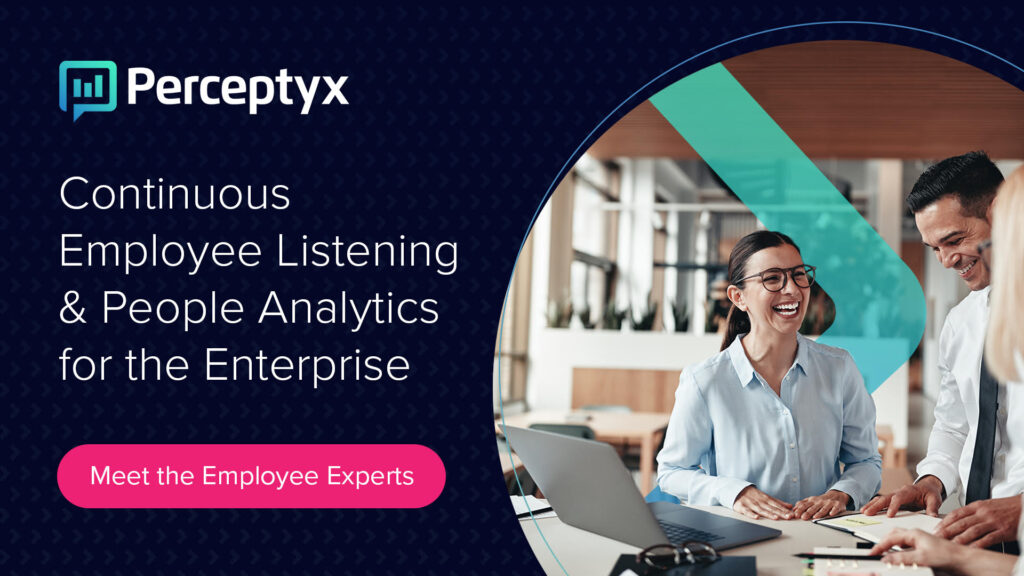