How to Build an Invincible Company 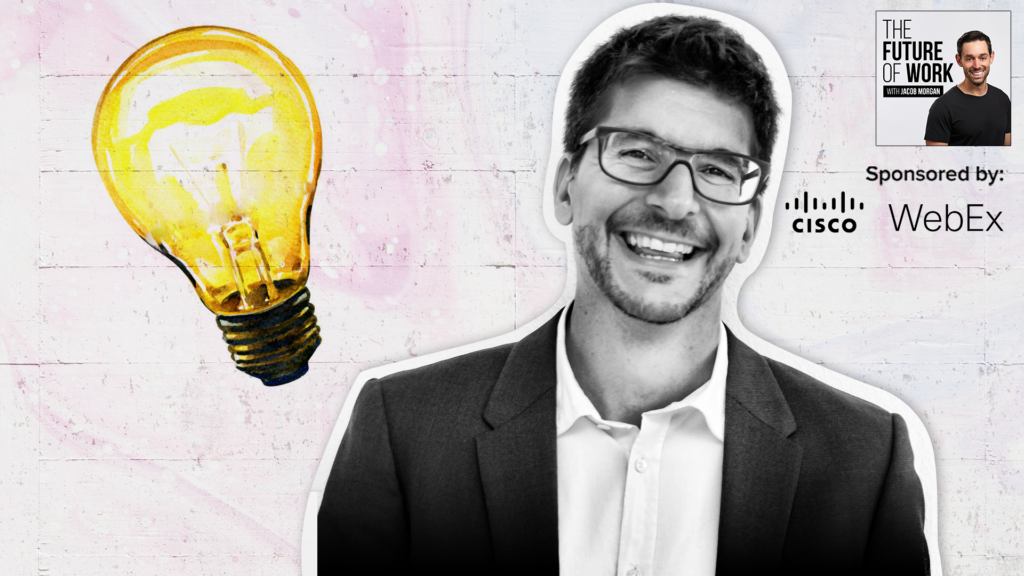 Alex Osterwalder is the bestselling author of Business Model Generation, Value Proposition Design, and Testing Business Ideas. He also released a new book back in April called The Invincible Company: How to Constantly Reinvent Your Organization with Inspiration from the World’s Best Business Models.

Alex is ranked #4 on the Thinkers50 list of the top 50 management thinkers in the world. Along with Yves Pigneur, Alex invented several practical business tools, including the Business Model Canvas, that are used by millions of business leaders today. For this invention they won the Thinkers50 Strategy Award in 2015.

He is also the founder of Strategyzer, a company that provides organizations with corporate innovation strategy, training, tools, and software.

This episode is brought to you by Cisco. Nearly overnight, the entire world has found itself adapting to a new way of working. The future of work requires a modern approach to collaboration – helping people securely connect wherever they work, while staying safe and being productive. Cisco is shaping this path forward. Check out their new page devoted to the future of work to learn more and check out their resources including articles, videos, and a workplace maturity assessment.

In the midst of the pandemic, organizations are facing challenging times and over the last few months, we have seen positive and negative decisions occur in response to what is happening. There have been some companies who have handled tough decisions while still keeping their people first–showing employees respect, empathy, and transparency. And there are other companies who have made, what seem to be, harsh and unfair decisions in a way that create anger and chaos. The question is, is there a way for organizations to prepare for uncertainties and challenging times in advance, so we don’t have to get to a point where these tough decisions have to be made?

There are situations where leaders will have to make tough decisions, regardless of how much advanced planning is done. But, as Alex’s book examines, there are ways to make our organizations more agile and fluid, so that when a crisis comes, they are able to not just survive, but thrive through it.

Alex gives a great example of two companies who faced the same crisis and their different outcomes. There were two large photography/film companies, Kodak and Fujifilm. Both were extremely successful at one time, but when the industry was disrupted Kodak kept using the same business model, which no longer worked. As a result Kodak went bankrupt and completely went away.

Fujifilm on the other hand had a CEO who had been obsessed with the thought of the company dying for awhile and had put a plan in place before it was too late. The company aggressively reallocated resources into a whole new way of business, which was cosmetics. It turns out the chemical process and the intellectual property related to aging film can be used in cosmetics for aging skin. So instead of staying on the same logical path of film, they saw the industry coming to an end and went an entirely different direction. They are still around today.

The key is they planned for this extreme disruption before it happened. If you wait until a crisis happens to react, you are never going to have a resilient company. You can’t make a change that big overnight, which is what a lot of companies are trying to do right now. You have to do the work upfront and be a bit of a futurist so that you can see multiple possibilities ahead.

So really, the responsibility for creating resilient organizations starts with the leaders. But the traditional way of leading organizations is not the right model for this type of change. We need a different style of leadership.

Moving away from the stereotypical leadership style

Being a leader is not about being knowledgeable in every aspect of business and it is not about making every decision, it is about creating the environment for great ideas to emerge and succeed. It is the job of the leader to create the culture that embraces creativity and innovation, and to give authority to individual employees to make decisions.

Alex gives a great example from the German company, Bosch. They decided they were going to invest in 200 projects inside the organization. So they gave those 200 projects a budget of 120,000 Euros and they gave them three months. After the three months were up the company looked at the results from all 200 projects and they killed off 70% of the projects and re-invested a bit more into the remaining 30% based on the results they saw. The remaining projects got to continue on for a bit more time and then after that time was done they all got reevaluated. And based on the findings from the evaluation, they discontinued 75% of those projects. So at the end of the process they got down to 15 projects (out of the 200) to continue on with.

The important part, as Alex explains, is, “It wasn’t the leadership that decided on the ideas, per se, it was the evidence that showed if they would get follow up investment. So what’s the leader’s role? It’s about creating the right environment where these teams can explore, fail a lot, and learn the environment where the teams that didn’t get follow up investments are not kind of stigmatized as losers because they couldn’t get the project, right? No, that’s a normal ratio from early stage venture capital. We actually know that one out of 250 ideas is an outsized winner. So, it’s that kind of culture you need to put in place. So we don’t start to stigmatize those who didn’t succeed, because they’re contributing to the portfolio. So as a leader, again, you shouldn’t be the expert, because then you hired wrong. That obviously depends on the kind of domain you’re in. And your main job is to create the conditions for success to emerge. So,you know, that is one of the messages that I found really, really intriguing from Alan Mulally, he likes to say, sometimes, as a leader, you can create too much value.”

Learn the 9 skills & mindsets 140 CEOs say are MOST crucial!

How to create a culture of innovation

Leaders can’t just let culture happen, culture has to be designed and managed. If you want to create a culture of innovation, it has to be done intentionally. A lot of organizations have failed at innovation because the CEO is not spending a lot of time focused on it. And if people inside the company see that the leaders don’t care about innovation, or worse, that leaders are punishing creativity and new ideas, then people are going to stop trying. CEOs do have to spend time focusing on executing and managing the existing, but if innovation doesn’t have enough power, it’s always going to play second fiddle.

As Alex shares, “At Logitech, the CEO Bracken Darrell spends 40 to 60% of his time on innovation. That gives innovation power because it’s symbolic if the CEO spends a lot of time on innovation. Then the next question is oh, so the CEO picks the winning ideas? No, the CEO creates the culture and metrics and spaces where innovation can emerge. And that is a partnership between innovation and execution. Those are two different domains and they need to live in harmony, not kind of entrenched in a kind of Warzone. So, sometimes innovators like to call themselves pirates or rebels. I think that’s silly because pirates and rebels get killed. Like why would you want to be a pirate or rebel? It’s not about breaking the rules. It’s about the leadership creating the right rules so we can do both. World class execution and world class innovation.”

If a leader feels like they just don’t have an innovative team, most likely there is a cultural problem. Either that leader or a previous leader in the company has punished people for actually exploring ideas or there is no incentive to innovate. The first thing that needs to happen to create an innovation culture is to tear down all of the blockers that are preventing people from innovating.

One of the biggest blockers to innovation that Alex mentions is business plans. He says business plans are the enemy of innovation because it is an execution document where you describe a dream in detail and you execute it. Innovation is about picking an idea, adapting it, and then changing it until you create value. There are other blockers like focusing on the wrong metrics and leaders thinking they can do everything on their own. You have to get rid of all of the blockers to innovation before you can put innovation into place. Alex suggests leaders read the shareholder letters from Jeff Bezos, which are publicly available.

How to start building an invincible team

If you are a mid-level manager, or a leader who is responsible for a team, but maybe you are not the CEO of the company, what can you do to start building an invincible team? Using a method from Rita McGrath, Alex says the first step is to take a look at your CEOs agenda and see how much time is carved out for innovation. Or look at the company’s last four important meetings and see how much time was spent talking about innovation. In either of those instances if the answer is not over 40%, you actually need to consider if it is worthwhile to spend your time on innovation, because as he says you will be “fighting against windmills”.

This is an important first step because you have to know what your company’s innovation readiness is. Is your environment ready for innovation to happen? If it is not, take a look at the top levels of the organization and ask yourself who can you get on board as a sponsor to support innovation. Is there someone at the top level who is willing to push for innovation and offer top level protection for people to explore?

Alex says, “You need that top level protection, I’d say, because otherwise all you’re going to do, and unfortunately we still see this in quite a few companies, all you’re going to do is innovation theater. No company is lacking innovation activities. There’s incubators, there’s all that kind of stuff. I’m not even talking about ping pong tables, I’m talking about real innovation activity. But as long as it’s not connected to strategy, it’s really a little bit of a suicide mission. I know a lot of innovation leads are up for that suicide mission. That’s why they call themselves rebels and pirates. But I think we need to be a little bit more pragmatic. And, you know, first understand, how ready is the company. And then based on that assessment, either change the job or say, Okay, here’s the strategy.”