How to Balance Technology and Humanity 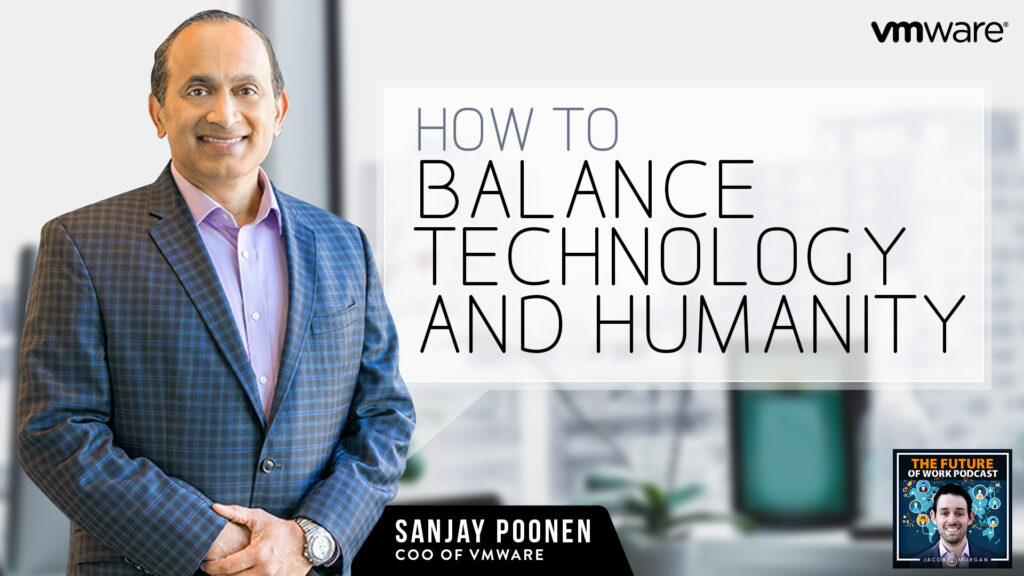 Sanjay Poonen is the Chief Operating Officer at VMware, a global leader in cloud infrastructure and digital workspace technology. They are the 5th largest software company and they currently have around 26,000 employees in offices around the world.

Sanjay has been with VMware since 2013, prior to that he was President & Corporate Officer – Platform, Applications & Industries at SAP. He started his career as a software engineer at Microsoft followed by Apple.

Technology today is advancing more rapidly than ever before, and it’s hard to tell what the world will look like 10-15 years from now. But Sanjay says some things will never change and as we progress we still need to make sure that we are training our children the fundamental principles of science, technology, engineering, math, logic, physics, etc…He also believes storytelling is an important skill for the future.

He says, “I think it’s super important that we emphasize storytelling to our kids. And I hope that dinner table conversations are not obsessed with keeping the TV on and the device on. We try to keep a no device policy for a period of time in the evenings in our home. It’s super important we go back to that basic principle of what people did around the dinner table, which is telling stories. And I hope that the classroom setting is the same time too. One of the dangers of this obsession with devices is that we move away from whatever friendship or family constructs that got people telling stories. I find often today, people are so obsessed with their devices, they’re not as good at carrying on a conversation, they’re looking down.”

For example, AI can be used to help doctors take more efficient, legible prescriptions via speech recognition technology rather than writing them out by hand. And it can be used in vehicles to help people park better or to drive more safely in heavy traffic. But it can also be used in selfish or even evil ways. With facial recognition there is a possibility that someone could be wrongfully identified and end up in trouble. Companies can sell data they have gathered from customers without permission. Because of these issues Sanjay believes it is critical for technologists, leaders, and governments to constantly have conversations and debates in order to make technology a force for good.

As a leader, how does Sanjay attract and retain the best talent? He says it starts with practicing servant leadership. “It’s super important that you’re always humble and hungry, and looking to learn. And part of it, being a servant-leader doesn’t mean that you’re a doormat that everybody steps over. I’m strongly opinionated, I’m passionate, I’m a hard negotiator, all those things. But I don’t want any smell of me that I’m arrogant, unwilling to learn, unwilling to listen. I make plenty of mistakes, I’m a work in progress. But I want my team to feel like, “You know what, this guy’s got a growth mindset, so I can give him feedback. And I want the person who’s at the lowest rung of my organization to feel like I’m approachable, as opposed to sitting in some ivory tower with a bunch of security guards around me that they can’t come and talk to me or send an email to me or walk into my office. And I’m always challenging myself to how I could continue to drive that servant leadership mindset, both in myself, and role model it to my organization.”

Huge thanks to VMware for sponsoring this episode! If you want a free copy of my upcoming book ‘The Future Leader’, go here.