Chess Master And CEO Gives His Take On The Skills Gap, The Future Of Leadership, Universal Basic Income And Much More 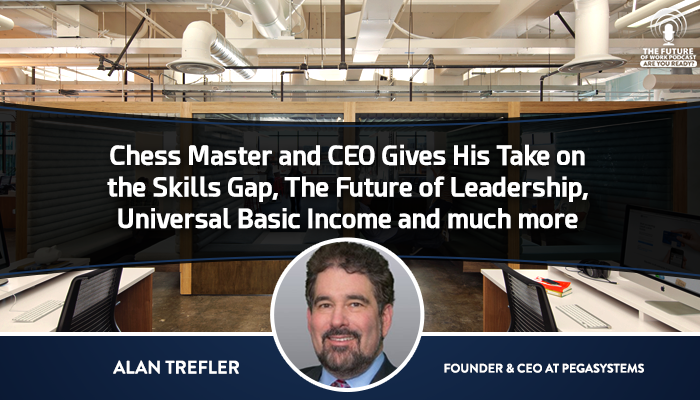 Alan Trefler founded Pegasystems and as CEO has built the company into a $750 million provider of customer engagement solutions with 4,000+ employees based in Boston with 30 global offices, growing about 20 percent annually.

Trefler’s life’s work has been to design a platform for living applications that businesspeople can evolve to manage the constant disruption and change in today’s customer-centric economy. Trefler’s book, Build for Change, describes a new generation of customers with unprecedented power to make or break brands and changes businesses must embrace to succeed.

Pegasystems (aka Pega) is the leader in cloud software for customer engagement and operational excellence. If you’ve driven a car, used a credit card, called a company for service, opened an account, flown on a plane, submitted a claim, or performed countless other everyday tasks, chances are you’ve interacted with Pega. For the past 30 years, their technology – CRM, digital process automation, robotics, AI, and more – has empowered the world’s leading companies to achieve breakthrough results.

Trefler’s interest in computers originates from collegiate involvement in tournament chess, where he achieved a Master rating and was co-champion of the 1975 World Open Chess Championship.

It’s changed over the years as technology has evolved. They have offices in 31 countries around the world. They have created collections of collaboration rooms so they can share with distributed teams. They are guided by their own software, designed to manage various tasks. They focus on being able to do case/work management to make sure people are aligned. They focus on trying to manage work around customer service.

Trefler believes that although there was a time when you would hear ‘silicon valley’ and think of innovation, today when you think of it, most people would think of ‘entitlement’. They’ve been so successful they have begun to ‘read their own press clippings’ – which is a very dangerous thing.

When asked to define leadership, Trefler says, leadership is defined by character and leadership by the ability to show a level of reliability. Ultimately, it involves people choosing to follow. We have moved past the era of coercion. The elements include being highly informed and knowledgeable – and being able to describe the sensibility.

Want To Learn More About Leadership?

The CHRO Of 24 Hour Fitness On Relationship Based Leadership

Leadership And The Future Of Work With Dr. N.S. Rajan